My first slaughterhouse vigil. Yes, such a thing does exist. In Spain, for the last year; in other latitudes, for the last decade. The idea was born in Toronto. The first time you participate in one of them, the surprise is even greater than the first time you hear about them. Perhaps you, who are reading these two words – slaughterhouse vigil – together for the first time, are just as surprised. You would even be more so if you had been to one. A group of hard-core vegans, the kind who go as far as to replace the egg in the Spanish tortilla with chickpea flour, gather outside a slaughterhouse to "bear witness" to lambs, pigs, cows and chickens in the last moments of their lives, minutes before being slaughtered. They pet them, whisper kind words in their ears, give them drinks of water from plastic bottles... It may well be the first time in their lives that they are able to experience the kind side of human beings. The farewell sometimes brings on a catharsis. After saying their goodbyes to a flock of lambs, two girls hug each other and sob inconsolably for several minutes. In Spain they are called “vegan vigils”, or vigils of such species or other of livestock (cow vigil, lamb vigil, etc.), but in the English-speaking world, they don’t mince words as much: they’re called ‘slaughterhouse vigils’.

Fair warning before continuing: it would be easy to convert this account into a carnivore comedy, portray the vegans who wait outside the slaughterhouses as an eccentric version of the “tree huggers”, surprise the reader with an account of the strangest part of the experience, which is no small thing – grasping the necks of terrified sheep and kissing them, the look in the poor animal’s eyes… and then round it off by saying that there’s a second part to this story, soon to be published, which consists of a visit to a sanctuary, where animals rescued from farms live in an atmosphere of camaraderie that defies the laws of nature. 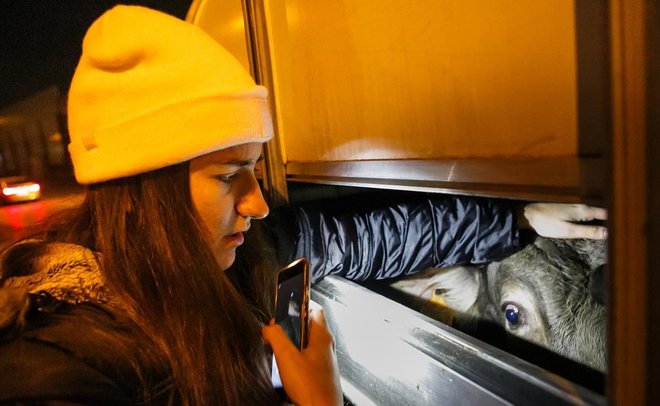 The vigils are peaceful. This is something that needs to be stressed. The activists don’t block the roads like bandits. There’s an unwritten agreement between the organizers of the encounter, the slaughterhouse security guards and the majority of the truck drivers who transport the animals so that things don’t get out of hand. The truck stops at the entrance to the premises. In the case narrated here, the place is inside Mercabarna, the huge logistics centre that feeds a city of four million people. Most of the truckers who arrive here are aware of what’s going on. For five or ten minutes, the vegans approach the trailer as if it were the monolith from 2001: A Space Odyssey. Some take pictures and others give water to the livestock. The lambs are shivering. “They bring them here nearly dying of thirst because they say the meat tastes better that way,” explains Óscar López, the vigil’s coordinator. He took part in the first vigil held in Spain, in November of 2017. Since then, they organize several vigils every month.

The truck then proceeds to the unloading area, where the activists are not allowed to go. As mentioned earlier, some are left crying, while others are kind enough to explain to the handful of carnivores who have gone there in the cold of the night the reason for such extravagance. The immediate purpose, they say, is to give comfort to the animals, to be the penal equivalent of their last meal before they themselves become a meal. However, in the mid- to long term, the plan is to fill the narrative void that exists between the time the animal is walking about and the final instant in which it is presented in shiny trays in the supermarket shelves, exquisitely quartered, with no clear signs of the animal that it once was and of how cruel its end was, something that might upset the consumer.

“We’re here to bear witness,” says one of the activists at the entrance to Mercabarna’s slaughterhouse. And that’s what it appears to be – he and the others go about with camera in hand to record a moment that is very animalistic, in the negative sense of the term. They're out there fighting a battle. The food industry, perhaps for preventive reasons, has been modulating its advertising message for months. In television commercials, farmers sing softly into the ears of their cows. In the poultry section we find eggs from “free-range” hens. What a sanitized redefinition of free will! López, who is a walking veganopaedia, explains why this is pure nonsense. A truly free ranging hen would lay 10-15 eggs per year and would live about 15 years. But these hens don’t live far past their second birthday, and in the meantime, they have laid anywhere between 400 and 600 eggs.

The Spanish vigils, in spite of the participants’ efforts to viralize them on social media, barely reach the carnivores. The account does not reach far beyond the fenced-in premises. Animalists form an inbred society. Luckily for them, a burgeoning cinematographic and documentary catalogue that does not leave one indifferent is readily available on Netflix and YouTube. Three examples are worth citing, in strict order of bearability, because - you are forewarned - the last of them is intentionally and brutally disturbing, akin to a vegan's idea of a 'snuff movie'.

The first mandatory stop for anyone trying to understand the reasons behind the vegan and animal rights groups (which, as in Ben Euler's diagrams, have vast common areas) is Okja, an acclaimed fiction that gives off a sweet, almost childlike air, which narrates the friendship between a rural South Korean farmer and a "superpig", a genetic modification of the conventional pig devised to end world hunger. The core of this cinematographic candy is, however, very bitter. The plot takes the spectators on a journey that ends up unexpectedly and painfully inside a slaughterhouse. There the only fictional element is the superpigs, who are as big as hippopotamuses. The slaughtering and cutting techniques shown are those used by the real meat industry. Okja, starring Tilda Swinton, is the best commando operation the vegan army could possibly conceive of. A surprise attack from the rear-guard.

'COWSPIRACY', INCLEMENT EVEN WITH GREENPEACE

Then there’s Cowspiracy, a documentary that starkly lays out the most effective piece of evidence in the animal rights groups’ arsenal: the fact that intensive livestock breeding is killing the planet at an even faster pace than fossil fuels. The director and narrator, Kip Andersen, sums up this position very well in a single sentence: For each hamburger served at a fast-food joint, 2,500 litres of water have been consumed. Cowspiracy has its enthusiastic advocates, although Andersen’s ‘enfant terrible’ à la Michael Moore style, ready to bundle together McDonald’s and Greenpeace, sometimes generates doubts.

In any case, Cowspiracy is the station where those who do not dare continue to the final stop can comfortably get off. That last station, Earthlings, is a voluntarily lacerating documentary. Narrated in a monochord voice by the actor Joaquin Phoenix and mounted mostly using scenes shot with a hidden camera, it is a very harsh animalistic statement that details the unspeakable actions that take place daily in the poultry, pork and cattle industry, as well as the unhealthy relationship between humans and other animals in areas like the fur industry, pet shops or circuses. In 1949, Georges Franjul inadvertently filmed the first vegan documentary in history, ‘Le sang des bêtes’, with no hindrance by the owners of the slaughterhouse. The sacrificing of a horse with a captive bolt (or “stun”) gun (yes, the same kind as the one used by Javier Bardem in ‘No Country for Old Men’) seems like child’s play compared to the succession of horrors shown in ‘Earthlings’. It is a sum of images that are very hard to assimilate, with its brutal objectification of the animals (the breeding cages, the debeaking of the chickens to avoid cannibalism, the humiliating dehorning of the calves, the anal electrocution, the skinning while the livestock is still alive, the kosher method of animal slaughter...), but, above all, the brutalization of many of those who work there, like in a real and endless version of the Stanford prison experiment, literally blanching the soul.

What we said at the start… the first slaughterhouse vigil is surprising, but not only because of the strangeness of being there, at the slaughterhouse doors, to caress lambs, but also because of everything that is uncovered when one pulls the thread ever so slightly. There’s more, but we’ll save that for another chapter. Just a spoiler: sometimes the activists manage to rescue an animal from death row. They are taken to sanctuaries. Days after the vigil, we visited one. I can only say that I’ve actually seen hens wearing sweaters.